In some work which I have been doing for which I have been unsatisfactorily retributed, I have come across two names among a large series of postcards which looked moderately interesting, at least for their owner.  My task was to decipher the writing, which the reader may notice, is not easy. On the other hand, with a certain amount of experience, it can usually be read.  I already have an article about this kind of writing called German Scripts, on this very same web-site.

Perhaps some reader can add information to that which I have here.

The first series of postcards comes from a colonel who may or may not have been famous.  The trouble is when there is more than one person of the same name.  Little did I know when I was young how many people were called Paul Moeller, a name found in at least four continents, according to my surfing.

The reader might ask what the importance of a colonel may be.  I would reply that Greece was once governed by a military junta which was associated with colonels, not generals.  I had read the book, Inside the Colonels’ Greece. Well, who knows, maybe the colonels were just the fall guys for the higher ups.  It doesn’t really matter, for whoever can make a name for oneself, even if that name will end being one of infamy, such as in the case of certain former American heroes, whose statues are being pulled down, and paintings covered up.  (It happens elsewhere, too.)

Here are scans of postcards sent out by a certain Karl Lorenz, all to the same person in Baden-Baden, a German town especially famous for tourism in the Nineteenth Century.  We could extract no useful information from these cards, other than one that specified that he was at the “Front”.  All the cards have what is called a Feldpostnummer or FPNs, which is literally a field post office number (at least at one time, if not at present, designated as A.P.O., or Army & Air Force Post Office in the United States. I suspect the German system was trickier though, because as a rule, it often changed location, or the unit to which it was assigned.  The information on line shows tremendous gaps, in that I have seen, with writers giving numbers for periods in which no data is available.  Collectors just assume that it is the previously-issued FPN, even if the date is not valid.  The word Oberst translates as “Colonel”, but sounds even more impressive in German, as it is literally the superlative of “high”, or “the highest”.  That should not, however, suggest that he have airs about being superior to a general!  Yet, at one time, the highest military rank was Oberster Befehlshaber, such as one finds in a book written in German about Duke Ferdinand of Brunswick-Wolfenbüttel or Ferdinand, Prince of Brunswick-Lüneburg.  In one of those strange twists of history, we find that Ferdinand led an Anglo-German army against the French. 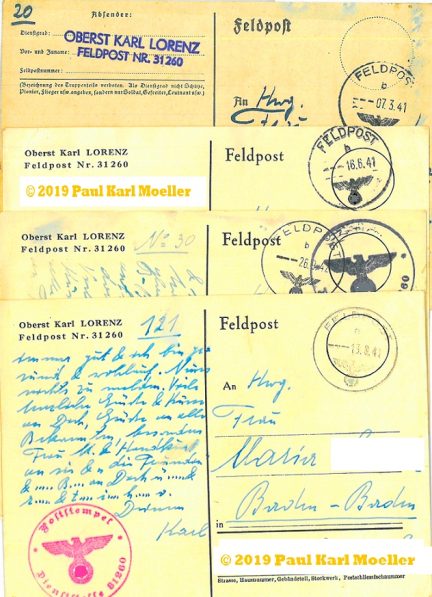 We note two different types of card, one with a rubber stamp of the Lorenz name, the other, a personalized card. The stamp of the FPN (which substitutes for real postage stamps, as the mail is sent free of charge) has come in two different colors.

About 3 weeks after writing this article, a review of previous work showed that I also had this, buy the same person: 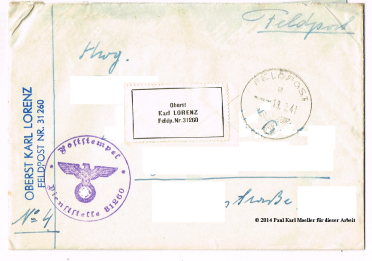 The Feldpostnummer of all of these is 31260.  A web search attributes this to Artillery Regiment 720.

Why do we think that this name could be of some importance?

There was a reasonably famous general of that name in the Second World War, but according to the site TracesOfWar.com, he had not been promoted to colonel until August 1, 1943.  The promotion to general came 15 months later.  So these two soldiers seem to have been of entirely different units.  It appears that Artillery Regiment 720 was in the wrong place for this to have been the more famous Karl Lorenz, unless the FPN was only used for routing purposes.

Our second item is equally tantalizing in its potential significance.  It was sent out by a Baroness (Freifrau) von Uslar-Gleichen. The image has been brightened up a bit, and as previously, the name of the recipient has been removed.  There are no objectionable symbols on this card, because it was sent by a civilian.  Nevertheless, it is postage free, as it is military mail, as indicated by the handwritten Feldpost in the position of the cancellation. 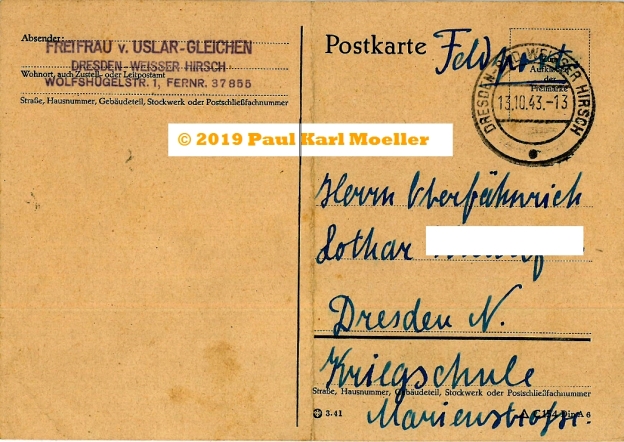 The handwriting on this side of the card – believe it or not – is totally legible.  The same could not be said of the other side, but it was possible to decipher all but one word.  Nevertheless, the rules of the game say that this is covered by copyright.  For war buffs, we can say that it gives us no information which could tell us anything that the military censors would not have wanted anyone to know – such as post office employees.  I think I can say that the card was sent to a relative, and was an invitation of some sort.  We shall not be more specific.

What makes this card interesting, other than the fact that it was written by a baroness, is that the only information readily available about this family is in the German version of Wikipedia.  I use the term loosely, because, although I have never heard this name before in my life, a web search is very fruitful about members of the extended family, prominent even now, as it was even before World War One.  At that time, there was a major general connected with Great Britain and the House of Hannover.  Four names follow his. These five, all prominent at one time, are without a Wikipedia entry.  Then there were two during the Second World War. One was an Obersturmbanführer of the S.S., the equivalent of a lieutenant colonel in the army.  The other one was more important, and we suspect the baroness was his wife: Harald Freiherr von Uslar-Gleichen, a brigadier-general.  (Freiherr is the German for Baron.)  There is some genealogical information available to individuals who have accounts at the respective web-sites.  The best that we could come up with – but this is very general information – is that a present branch of the Uslar-Gleichen family was related to the last queen of Bavaria, who, except for her having been a Roman Catholic, could have had a claim to the British Throne through the Jacobite line. Her British title was, from that point of view, Mary IV and III, Queen of England, Scotland, France, and Ireland, Defender of the Faith.

A particularly interesting feature of this postcard, in that it comes from a private individual, is the prominence of a telephone number.  This is clearly something that people do not put on the outside of their correspondence at the present! The precise address has a combination of the elegant and the threatening, Weisse Hirsch – white hart, (a neighbourhood of the city of Dresden), and the street name: Wolfshügel: Hill of Wolves.

This site uses Akismet to reduce spam. Learn how your comment data is processed.